By becoming aware of the intricacies of your nervous system, you can learn to control it. And because the nervous system serves as a sort of unifying field between the physical, emotional, and mental bodies, learning to direct it consciously can provide a path to psycho-spiritual mastery.

In my previous article, I discussed how to avoid the glamour and illusion of spiritual advancement. You should read it if you haven’t done so already, but here’s its major takeaway…

Spiritual advancement is about being in right relation, not developing “powers.” It’s about striving after personal mastery and transpersonal awareness, gaining gnosis through experience, and dedicating oneself to serving and inspiring humanity. Energetic sensitivity can be a positive motivating force along the Path, but only if you guard against seeking it as an end in itself.

If you can steer clear from the siren songs of personal power and illusion, energetic awareness can be an enriching and awe-inspiring aspect of your spiritual practice.

The experiences offered to you by this awareness serve as phenomenological signposts, psycho-spiritual symbols that boldly point the way toward new landscapes of physical and noetic understanding.

There are many manifestations of energetic sensitivity (“ascension symptoms,” as some spiritual teachers like Lisa Renee call them).

Shamans and native medicine men speak of “seeing energetically,” yogis and mystics place emphasis on “opening the third eye,” and practitioners of various modalities have integrated “kundalini ascension” into their spiritual vocabulary.

There’s a common thread that runs through all of these states of being: they are experienced sensuously as emergent phenomena that interact with your consciousness in novel ways.

Simply put: a lot of the action is happening within your own body.

Therefore, when endeavoring to awaken the higher senses, it’s important to focus the awareness on the subtleties of your own body-mind system.

By becoming aware of the intricacies of your nervous system, you can learn to control it. And because the nervous system serves as a sort of unifying field between the physical, emotional, and mental bodies, learning to direct it consciously can provide a path to psycho-spiritual mastery.

Learning the secrets of the yogis

The esoteric science of nervous system control is vast and complex, and has informed the lives and actions of countless spiritual visionaries down through the ages.

It’s estimated by some Theosophists that in the Vedic tradition alone, over 80,000 tracts have been composed on the subject. Body-mind system mastery is regarded as they key to silencing the mind in some Buddhist sects, and it is central to the practice of shamanism, as well as many forms of indigenous medicine and ritual.

The concept even appears in early Gnostic Christianity (before it was perverted into self-mortifying practices like flagellation).

I’ll try to elucidate this fascinating discipline bit by bit in other articles and books. For now, let’s start with just a few fundamental principles of esoteric physiology…

1.  The physical body is an emergent outgrowth of the etheric body. It is condensed vibration slowed to the frequency of physical matter and ordered according to a universal template.

2. The physiological template is ordered around energetic centers of focus (often called chakras). These chakras are magnetic light vortices that serve as hubs for all of the body’s energetic channels.

3. The body contains innumerable energetic channels (called nadis in yogic philosophy) that emanate from each chakra center. All of these channels are also ordered according to the Principles of sacred geometry.

4. The body’s etheric channels may be controlled and directed through proper combination of physical alignment (such as asana or shamanic ritual posturing), breathwork (pranayama), and intentionality.

5. All physical form is vibration, which may be thought of as shape created by sound. For this reason, the combination of geometry and sound current are the key to directing both physical matter (phenomena) and non-physical Forms (noumena).

6. Vibration becomes audible sound when it is imbued with life force. This is how sound current becomes a creative force for shaping and guiding energy. Our breath (the outward manifestation of what yogis call prana) is the easiest vehicle through which we can project our life force.

7. This conscious wielding of life force, sacred geometry, and sound is the foundation of Raj Yoga, the highest, most ancient, and most esoterically guarded of all yogic practices. It is one of the most powerful practices to which we have access for using the body-mind system to bridge the higher and lower realms of existence.

Don’t worry if this information seems overwhelming. Don’t try to think your way into understanding it. Remember: intuition, not cognition, is your path to higher awareness.

Simply open yourself to an understanding of these concepts. Allow the information to be integrated at a pace that feels natural and effortless to you. Psycho-spiritual development is not a race.

Meditate on them one by one, and try to feel what happens in your body as you do so.

It’s not so much the information itself, but rather your body-mind’s interaction with novel information structures, which will catalyze new understanding and experience.

In the final article of this series, we’ll explore how to put all of these fancy theories into practice, so that you can begin (or continue) to build your spiritual toolkit…because metaphysics is futile without action.

I’ll leave you with one more comment for the time being: keep in mind that all words, assertions, theories, and doctrines are merely heuristic devices wielded by the mind in an attempt to comprehend the Whole. Though there is certainly more going on than any reductionist scientific paradigm would admit, the description of this greater reality is not fixed.

If the language used in the principles above doesn’t resonate with you, be sure to listen to your intuition. Ask questions, refuse to buy blindly into concepts without gaining our own experience of them, and forge your own path.

The very act of entering into this inquiry will open your being to new ways of considering the world (and your place within it). The point is not to accept these principles as Truth. They are merely offered as helpful points of orientation sourced from our ancestors’ forays into the human psyche.

There are as many spiritual paths as there are sentient beings in the universe. Find yours, and follow it with courage, understanding, and awareness. 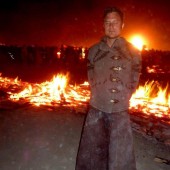